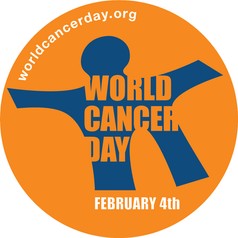 It’s World Cancer Day coming up on the 4th February, the day on which we focus on and unite in the fight against cancer on a global scale. Over the last 3 years the campaign has centred around a message of ‘We can. I can.’, exploring how everyone – as a collective or as individuals – can do their part to reduce the global burden of cancer.

I’d like to focus particularly on lung cancer, a serious and unfortunately one of the most common forms of cancer. With around 45,000 people diagnosed in the UK each year, 90% of whom either smoke or have done so in the past, it usually affects people over the age of 60. Younger people can develop lung cancer, but this is much less common.

There are two main types of lung cancer:

Lung cancer starts off in one or both lungs and is the uncontrolled growth of abnormal cells, usually the cells that line the air passages. Instead of developing into healthy lung tissue, these abnormal cells divide rapidly and form tumours. In many cases the cancer isn’t picked up until quite late on, mostly because symptoms don’t present until the tumour is quite large.

The issue with many of these symptoms is that they can be symptoms of other conditions too, such as the flu or even a common cold. The key is how long the symptoms have been there for – a cough from a cold or flu should be showing a marked improvement within 2-3 weeks. A cough that is persistent – won’t go away or keeps recurring regularly – should be assessed by a medical professional to ensure it’s nothing more serious. It’s important not to ignore these symptoms – get them checked out to rule things out.

What can you do to reduce your risk of developing lung cancer?

Choosing healthy lifestyle options such as keeping physically active, choosing healthy food & drinks but most importantly quitting smoking, can have a significant effect on your risk of developing lung cancer – and other forms of cancer. The fact is that tobacco use is the single largest preventable cause of cancer globally. Smoking 25 cigarettes a day increases the risk of lung cancer by 25 times, compared to a non-smoker. Quitting smoking will not only impact on your own health but that of your family and friends too.

It’s never too late. Stopping smoking at any age will be worth it, affecting your life expectancy and your quality of life for the better. Your GP can point you in the direction of local smoking cessation advice to help you give up for good.