We’ve come a long way since the days of smoking sections on aeroplanes and smoking tables in restaurants – partly thanks to the awareness of the dangers of passive smoking. Since the smoking ban was introduced in England on 1st July 2007, making it illegal to smoke in enclosed spaces, there’s been a shift in the attitude and behaviour towards smoking in the UK. Official figures suggest that there are now fewer smokers than there were 10 years ago, the younger generation aren’t taking it up as much and it’s generally a less socially acceptable pasttime than it was prior to the ban.

This all sounds incredibly promising.

But the fact remains that there are still over 8 million people in the UK who choose to smoke, so it’s still very much a cause for concern for national health. Estimates suggest that treating smoking related illnesses costs anywhere between £3 billion and £6 billion a year, so it’s a costly habit for health too.

We’ve talked about how important it is for the health of you and your family to stop smoking in a previous blog. Now it seems that it’s not just smoking, or even passive smoking, that we should potentially be worried about when it comes to our health. Scientists have recently called for studies into the effects of ‘third hand’ smoking – this is where the chemicals from cigarettes that are present in clothing, carpets and other surfaces – and how it could be a potential health risk.

Laboratory tests by US researchers have shown that these toxic chemicals from cigarettes can become airborne after coming into contact with clothing and furniture and then spread round through office buildings and even schools. Whilst we’re all very much aware these days of how harmful smoking or passive smoking is (where a person is in close proximity in an enclosed space to someone who is smoking), there hasn’t been a great deal of testing on the effects of this ‘third hand’ smoking. However, lab tests have shown that indirect exposure to tobacco residues “detrimentally affect growth and immunity in mice,” according to the scientists. The potential issue is as a result of nicotine residue, which then interacts with nitrous acid, formed from the gas nitrous oxide (released by car exhausts and gas appliances). These chemicals combine to create tobacco-specific nitrosamines (TSNAs) which could cause cancer.

This is of particular concern when considering babies and young children who have parents that smoke, or are regularly exposed to other adults that smoke. With small children and babies often touching objects around them and putting them in their mouth, they are being exposed at a much higher level to these third hand residues.

And if you use e-cigarettes the news isn’t any better: with e-cigarettes also containing nicotine and in fact currently being used much more in enclosed spaces, the dangers are still very present.

Getting rid of these third hand residues isn’t easy. The chemicals build up over time and are resistant to normal cleaning methods, so if you’re a smoker and you want to eradicate it altogether, the only truly effective way to do so is to replace carpets, furniture and the like. That could prove to be expensive,especially as you’d need to do it every few years.

So it seems that the best way to minimise the risks of exposure to young children and other non-smokers is to stop smoking. Creating a smoke-free environment is the only way forward for the health of you and your family.

If you’d like help with quitting smoking then take action today. Visit the NHS Smokefree website where you’ll find plenty of excellent advice and help with ways in which you could quit for good. 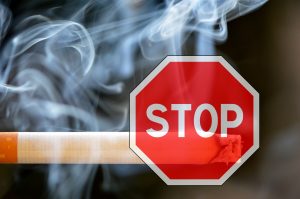